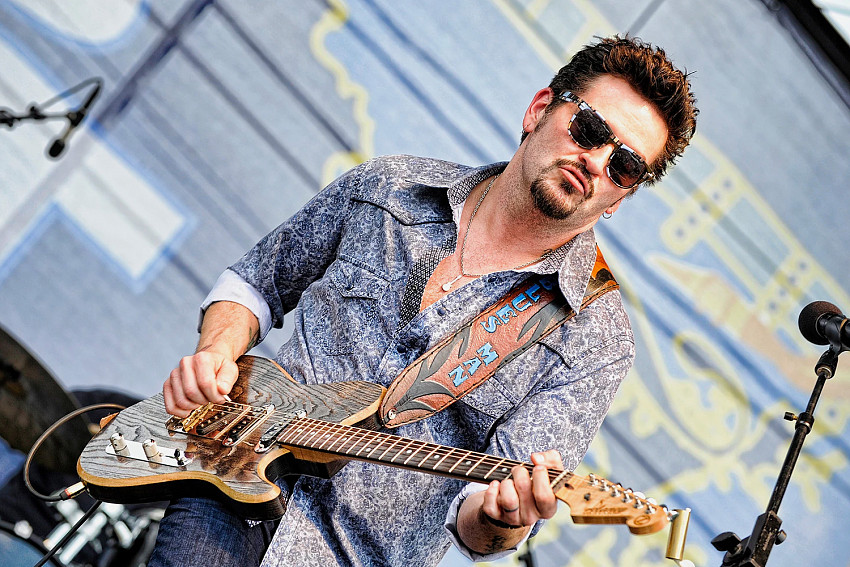 Mike Zito couldn’t help but be great. It was either that, probably, or end up on a wanted poster in the post office. There is something deep down in Zito’s soul that will not stop screaming, pushing him to take life to the limit and worry about the tab later. Before he found music and really let it become the guiding force in his world, the young man ran in all the wrong directions. Sometimes people were chasing him, but just as often Mike Zito was running from himself. Finally there was nowhere to run. It was time to literally face the music. And what Zito found was that he had a sound buried inside, something that was trying to get out and share itself with the world.

That’s where the Greyhound bus enters the picture — in a big way, because the singing guitarist grabbed one out of town with a ticket to anywhere else. When he got there, Zito started playing like his life depended on it, because it actually did. He put his shoulders and heart into it with everything he had, and worked his way up the mountain to where he stands today.

Greyhound, produced by Grammy-award winning guitarist/singer/songwriter Anders Osborne, is the continuation of the songwriting process established by Zito on his two previous critically acclaimed recordings on Eclecto Groove Records. His music retains its bluesy Americana charm and big wide-open Texas sound as he explores more personal and introspective themes inspired by that fateful bus trip that helped determine his path in life.

There have been hundreds of shows, a few albums, and the same desire to make a claim on eternity. That’s where the music lives, and that’s where Mike Zito is destined to go. Thank God for that Greyhound. Mike Zito got there.

2009 Blues Music award winner Mike Zito is one of those rare artist that can sing like nobody’s business, can write songs that instantly grip you, play one hell of a mean Gulf Coast style guitar and has the stage presence to draw in any audience. Born and raised in St. Louis, MO he grew up listening to Van Halen and Led Zepplin and it wasn’t until later he became interested in the great blues men who were from in and around St. Louis. On his 2011 Blue Music Award nominated CD (Best Blue Rock) Delta Groove release “Greyhound” he tells the rest of the story of how things could have been much different. He lived a rugged life much like many great musician endings while his beginning had not yet begun. Homeless, addiction, living the life of a criminal Zito had reached his rock bottom before cleaning up and ending up in Texas to live a sober life still today. It would be fair to say that is the time he draws from that creates all the emotion in his guitar style and singing. In 2009 Zito and Neville won the Blues Music award for “Song of the Year” for “Pearl River” the title track to Zito’s 2009 release. Zito comes armed with raw tone and pure grit that he can turn on a dime into silky smooth guitar melodies but it is the aged depth to his vocal that make Mike Zito stand out amongst the other cats claiming to have “the stuff”. Some lucky bastards are just born with it!!